The Suffield Township Board of Trustees met on Tuesday August 13th at 7:30 PM to conduct a public hearing on some Zoning Resolution changes.  After some discussion, the trustees voted 3-0 to accept the changes.  The changes become township law in thirty days unless there is an appeal to the County Prosecutor's Office.  (click here for Zoning Resolution text changes)

Then the trustees met again, this time for their regular business meeting.  Many issues were discussed.  Tom Calcei mentioned that Fire Department Captain Connie Milahik had retired at the end of July after twenty-five years of faithful service.  He also mentioned that she received a check for $10,000 from the trustees in appreciation of her 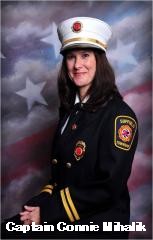 service.  Just two meetings ago the trustees had voted to award fire department employees $10,000, if they had twenty-five or more years of part-time service.   Captain Mihalik is the first Suffield Township employee to receive this benefit.  Part-time fire department workers are not eligible for pensions from either the Ohio Police and Fire Pension Fund or from the Public Employees Retirement System.  Calcei also gave the monthly fire department report.  The firefighters responded to 84 calls for service in July.

The new Dollar General store on State Route 43 is nearing completion.  They expect to be open approximately September 3rd, but may open before that.  The Dollar General people have informed the trustees that they want to apply for a license to sell beer.  The trustees voted to not oppose their request.  Fiscal Officer Lori Calcei submitted the county-approved 2020 budget and the trustees voted to accept it as written.  The Portage County Board of Elections asked trustee chairman Jeff Eldreth to remind Suffield residents that they are in need of poll workers.  The County will pay poll workers $20 to attend a training session and $120 to man the polls on election day.  Need more info, call 330-297-3512.   Eldreth also mentioned that the 2020 Census is rapidly approaching.  Census workers will be around the township and each will be armed to an official U.S. Census handbag and an official badge.

Zoning Inspector Adam Bey reported that he had issued some permits for pools and for one new house on Pheasant Lane. He also said that there will be a Board of Zoning Appeals hearing on Tuesday August 27th at 7:00 PM, concerning an accessory building on North Polen Road.  Bey also said that there is some interest in a couple township properties, of which both have become eyesores.  He hopes to have more information to pass along at future meetings.

Jeff Eldreth said that Henry Luli Construction Company is preparing to start the chip and seal program next week and hopes to have about half of the work done before the school year begins.  Eldreth asked for a purchase order in the amount of $18,000 to buy slag.  The trustees agreed to spend the money.

Some familiar faces returned to the crowd tonight.  Of the eleven people present, it was good to see Dennis Copley, Dave Vartenuk and Howard Coomer again.